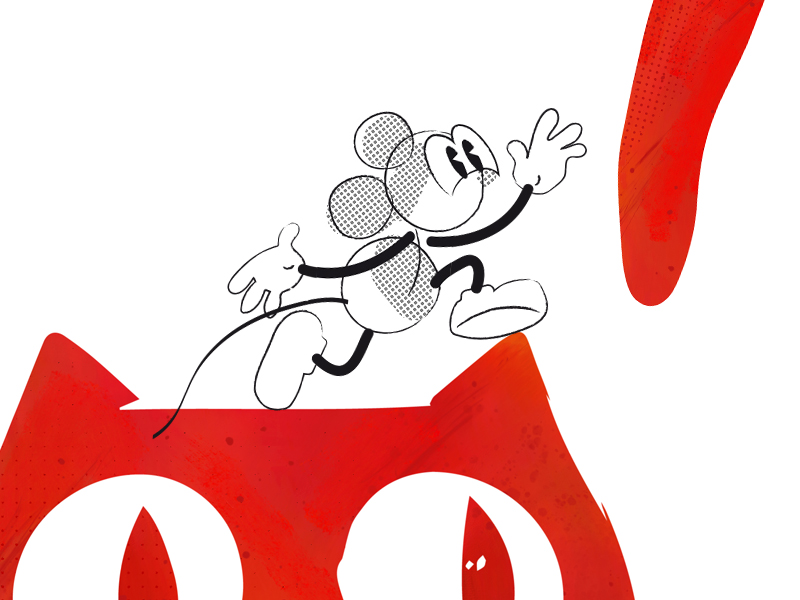 All illustrations by CC

In 1932 a 28-year-old designer named Earl Arnault, from Oregon, USA, invented a clock to bring some cheer to a country in the midst of The Great Depression. This clock came in the form of a cat with a “wagging tail, rolling eyes, and contagious smile”.

At this time the comic strip and animated film market was saturated with b&w cartoon cats making it an obvious choice for Arnault to achieve the feel-good factor. The most famous of these was Felix the Cat (1919) but there were also Krazy Kat (1913), Julius the Cat (1922) and Waffles (1921).

Kit-Cat’s appearance is rooted in the animation style of the 1920s and 1930s. With his smooth lines, black body, white muzzle and huge bulbous eyes he could be easily mistaken for one of the aforementioned cats. This style is known as rubber hose, the first standardised Hollywood style of animation, because of the fluid, rubbery way in which the characters moved.

There really is no mistaking these early cartoons, wonderfully surreal, at times disturbing, there would be nothing surprising about a cupboard opening its own door to hand the homeowner the contents, or for a bird’s beak to take on the form of a musical instrument as it sang. Just like the Busby Berkeley films of the 1930s that used dancers’ bodies to create dazzling kaleidoscopic displays, the cartoons fed into America’s insatiable desire for escapism from their real-life troubles. I am most fond of Fleischer Studios’ Betty Boop cartoons featuring Cab Calloway, the combination of the animation and the soundtrack capturing the mood of the era so perfectly.

It would be wrong to talk about famous animated animals of the 20s and 30s without mentioning the biggest (yet smallest!) of them all – Mickey Mouse. Walt Disney created Mickey having lost the rights to his previous character, Oswald the Lucky Rabbit (created by Walt for Universal Pictures in 1927). Mickey’s early appearances make full use of the rubber hose style, where stretching and bending limbs play a crucial role in what the characters are able to do. While Oswald disappeared quite quickly, and Felix failed to find success in the sound era, Mickey is the anthropomorphic animal who has stood the test of time. Going back to the topic of time, Mickey Mouse has been featured on wristwatches and alarm clocks since 1933. Unlike Kit-Cat it isn’t his tail that moves, but his rubber hose arms, rotating round as the clock hands.

“Mickey had to be simple. We had to push out seven hundred feet of film every two weeks.”

Kit-Cat has remained remarkably unchanged since his birth (see our timeline), his enduring popularity rooted in nostalgia. His popularity soared in the 1950s and then again with jewelled versions (the idea of the sales manager’s wife, jewelling the first one in her kitchen) being the Kit-Cat of choice in the 1960s and 1970s.

There was a period of time, starting with Pluto the dog (sold exclusively through Disney outlets) when the company made other animals – a poodle, a bear and an owl – but with the change to battery power in the 1990s the cost of moulding these variants was too high when it was the Kit-Cat that remained the most popular.

Primarily a USA-based icon for many years, interest in Kit-Cat has surged across Japan, then Europe and Australia. Jennifer Faul of Kit-Cat’s California Clock Company told me they partly put this down to “widely-accessible internet-based shows such as Stranger Things that included Kit-Cat in pivotal scenes.”

Surrounded by a digital world, there has been a move back to analogue with vinyl and cassettes in recent years, a trend which Kit-Cat fits in with, even Mickey Mouse and his friends have revisited the original animation style in a new series of shorts and after 60 years Oswald the Lucky Rabbit has made a comeback, featuring in video games and merchandising. Faul says Kit-Cat is part of “a desire for nostalgic home décor that comforts and uplifts in this time of change.”

According to the company, someone buys a Kit-Cat Klock every three minutes – an average perhaps helped along by Lucille Ball buying a case of them every year to give as gifts! I asked Faul how the company innovates whilst staying true to the original design, and the answer? Limited editions. The company uses fashion colour forecasts to create several limited edition clocks per year and more recently that includes hydrographics and glow in the dark coatings to make, as Faul puts it, “even more exciting clocks.” They have also introduced Lady Kit-Cat (with a pearl necklace and eyelashes) and a three-quarter size Kitty.

Pre-1960s electric models change hands for £100+, with jewelled models generally priced higher. With vintage parts still available from the manufacturers, a broken clock can still fetch a fair price. Bizarrely, despite the detailed dating timeline available, many vintage Kit-Cats are still wrongly dated when sold so look carefully at the back plates before purchasing.

If you haven’t seen Steamboat Willie (1928 Mickey Mouse) you can find it in excellent quality on Disney Plus.